Can we fix it?

Greetings from your illustrious blogger Bike Snob Brizvegas aka Tamedog Stone Device. I'm most certainly not plagiarising  Bike Snob NYC aka Wildcat Rock Machine not at all.

This week I was in fixit mode. I brought Betty in for a viewing and major wheel rebuild. There were a lot of oohs and aahs as they all admired the fine work that my classmates from last year did on my bike. I can't give them all the credit I did put the horn and seat bag on. Here she is in her birthing suite reliving the 6 months gestation period for her final emergence from her cocoon into a beautiful butterfly. 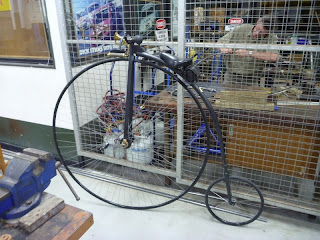 Now we were here on a mission to sort out the spoke issue. As I have mentioned previously I had this tendency to break the odd spoke or 5. So first step was to de construct the wheel. For those of weak dispositions or emotionally challenged please look away now.


Now this was a painful experience especially when Brett found the cordless screwdriver after I spent over an hour or so pulling the wheel apart. That tool would have saved me say around an hour or so.. So Brett the Builder had a look at the rim and noticed when I drilled the holes I didn't offset some of them by the 1BTKB7DH (1 better than Kevin Bacon 7 degrees hole) which would have caused the spokes a lot of undue strain and pressure causing them to break so can he fix it? 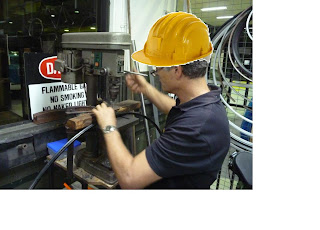 I sure hope so! Brett redrilled the holes proving that I should have outsourced the drilling in the first place. Now the wheel is in for reconstruction and fingers crossed that will reduce my need for replacement spokes! Oh yeah other stuff happened in the class as well.

People stood around a table looking at stuff.. 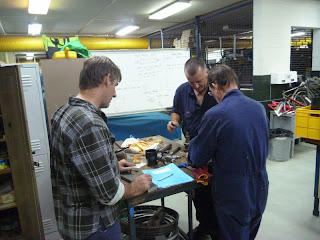 People stood around looking at me pretending to work. 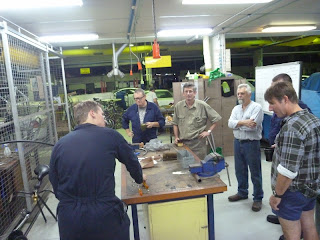 People, who need people are the luckiest people in the world.
- Tamedog Stone Device 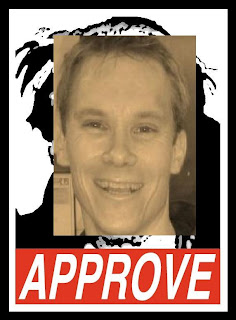 Ps. There are no similarities between the legendary Bike Snob NYC and this blog. None what so ever he's funny, intelligent, observant and has a helper monkey where as I have a helper Gibbon. Completely different.
Posted by Aaron at 17:38