How have you been? Yeah not much either you know just the usual....

Greetings gentle reader. First up an apology for the lack of blogs over the past month or so. I have a series of excuses each more preposterous than the next. Mostly it boils down to the fact its been hard to work out what to write since finishing Betty.

As part of my preparations for the 100 mile ride I've done about 2200kms since the end of November in training averaging around 240kms a week. This distance includes around 400kms on Betty. Whilst on a normal week commuting I'll do anywhere between 130-180kms I increased that and included a long weekend ride. The only problem in recent weeks is that Betty doesn't really like being taken out in the wet. She's a fine refined woman who doesn't like getting her beautiful sexy body wet and dirty. I'm getting a little frustrated at the weather but I'm sure I'll have some opportunities soon to do more practice.

To make up for her limited rides recently I bought her a new handbag a nice Zimbale leather one, not cheap but she's worth it. 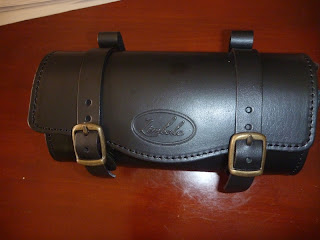 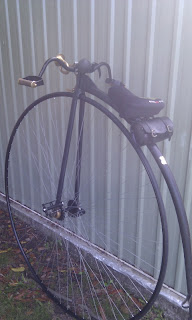 One of my recent rides on Betty I went up the Sir Leo Hielscher Bridge aka Gateway bridge as part of my training for hills. I was impressed I managed to make it although my cadence by the end was very low. Going down was a bit scary but with the front brake lightly working and controlling the pedals I kept it controlled. 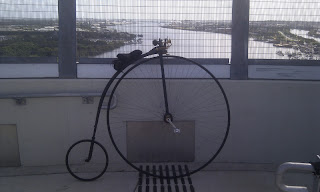 To take us out some Pennies and even a tricycle feature in this video 1.38 in