Dear Diary
Today has been the first day feeling has come back to my unmentionables and waist related area and going down stairs only causes moderate discomfort. Yay! Why is this a bit achievement you may ask? Well I completed my first Penny Farthing imperial century on Saturday 18 February.

Well gentle readers once again I've been slack things in the lead up to the century was very busy. Lets take a step back in time to explore those. (btw my apologies for this long and not that funny post)

During the ride I broke three spokes and had more problems with the cotter pins and the circlips holding the bearings in were coming loose again. So I sent a grovelling email to Good King Brett requesting his assistance in this dire situation. Good King Brett kindly agreed to see what he could do.

So turning up to Bracken Ridge was like being in a time warp except without sweet transvestites and mad scientists. I got to work mummifying Betty for her big trip. Then Brett and I with help from the bicycle mechanic class he was teaching made some more spokes. Then Brett found some pipe i could use as a sleeve to hold the circlip in place on the axle beside the crank arm. Then we put in some english cotter pins that held the cranks steady. So Betty was ready for her first flight. 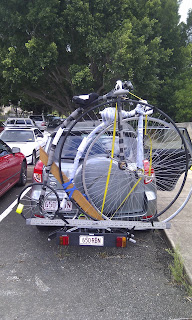 Time passed.... bla bla bla.... flew to Launceston.... bla bla bla.... then visited Betty in her holiday home at Di and Michael Sullivan's in Evandale. Now Di and Michael are two of the nicest people you could ever hope to meet. Di constantly answered my innane email questions with good humour and patience. They  then picked Betty up from the airport offered her a cup of tea and found a nice place for her to stay at their house.

So another fast forward...... Saturday morning 7am at Di and Michael's ready for the ride meeting some of the eight others doing the ride. It was time for the off. 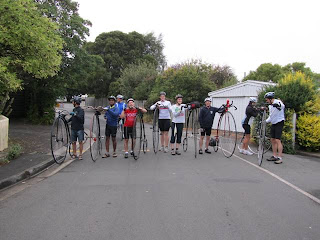 I mounted Betty and we were off the pace through Evandale was nice and serene the weather was patchy cloud with some drizzle this weather would remain through the day but limited drizzle. After the first challenge the left hand bend on the short downhill leading out of town I headed towards the front of the group. The first part was great chatting with others learning about them and their bikes and mining for as much information as I could on how to survive this day. We had a nice and serene ride I was trying to keep the pace up a little into the low 20's to get a few kms under the belt early. I was feeling good and riding well and catching up to Bel and Phillippe when bang the first spoke broke. Luckily I had taped a bunch of spares to the bike so replaced it but I wouldn't see Bel and Phillippe until the end. I decided to leave my spokes with one of the support cars as it was a PITA untaping the spokes and I had a feeling I'd be needing more of them.

We then meandered on I tended to ride with others where possible Dan, Catherine and I worked quite well together. Dan and Catherine both do Ironman triathlons so are approximately 84.3 times fitter than I but was determined. Catherine was riding the racing Penny that Brett built a beautiful bike I was sorely tempted by but it is a 52inch a little smaller than I would like. Our first main rest stop at Andy's bakery was a welcome stop with their spectacular toilets. I had broken another spoke by then I had fixed at the side of the road. This would become a recurring theme. By the end of the day I'd have broken 5 spokes. I am now quite proficient at replacing spokes. 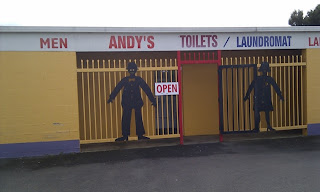 After Andy's we rode through this section called Reedy Marsh. This was the toughest part with the most hills I had to walk two short sharp hills partly as I had already done 90kms by then, they were quite steep, I was worried about breaking more spokes and it really was a nice time to walk a little to rest the bum. After that we got to Deloraine where I replaced the spokes got a photo with the train and set off. Now I was enjoying riding with others so generally I found it better to wait and ride with people that go off like a train. 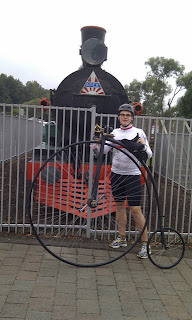 Catherine, Dan and I once again got together and enjoyed a nice tail wind. It was in this stage I saw an echidna only the second time I've seen one in the wild.

The last 40kms were a bit more painful my butt had stopped sending as many shooting pains but was numb some headwinds really pulled the wind from our sails. We were grinding along. Poor Dan kept breaking spokes I'm not sure of his final count but I suspect it was about 8. With about 10kms to go he stopped to repair his latest breaking and with his blessing I continued on at this point I could taste the finish line. There was one final cunning trick this route had was a short sharp pinch into Evandale itself. Ordinarily it would be ok but I was loosing my climbing legs and patience. I did dig deep and make it without walking I was so determined not to get off there was a T junction and right hand turn on the hill I wouldn't have stopped if there was a semi coming.

I started getting a little emotional heading into town a long wonderfully painful day I had been planning for months was finally at an end. I also realised I had no idea where the finish line was. Oh crap I decided best course was to head straight into town and hope for the best. There was a number of people there all clapping and I couldn't have been happier to dismount Betty and hug Rachel.  I had achieved my goal to not crash and finish!
The end. 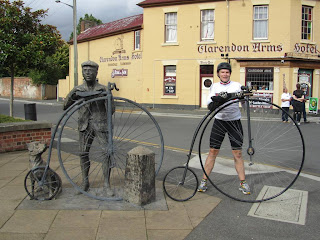