Hello and a warm welcome to my first blog. This blog was born when I started a course to build a penny farthing. I want to record what it's like to build one and what I've learnt. I will also talk about other things poking around my noggin. So lets get started.

Monday 28 March I went to the build a penny farthing course through skills tech.

This is me excited and looking forward to the class. Notice the onesy. I felt pretty stylish. 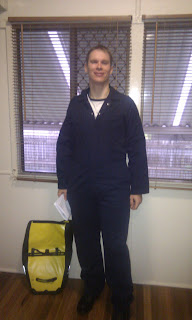 The teacher Brett Richardson is a long time enthusiast of the penny farthing he has raced them and built them over 20 years.
The class is fairly small only ten and the most surprising thing there was only two beards!
Some less than interesting facts about Penny Farthings.
- They were actually called ordinary bikes, they were only started to be called penny farthings towards the end of their popularity due to the size of the wheels. They are also referred to as high wheels/ers.
- As you sit essentially over the pivot point 'headers' were a regular crash where you go over the handlebars.
- Some one has ridden one around the world
- The front wheel got so large as the quest for speed and efficiency meant larger wheels travel further.
- The modern safety bike replaced them once someone worked out the whole chain and gear system.
- Penny farthings were not the first type of bicycle

The first thing we did was watch a video of the history of modern bicycles. Then after talking about a number of things we hit the workshop. This is an example of the type of ordinary bicycle we will be creating. All our bicycles will be slightly different but similar to this fairly traditional looking ordinary bicycle. 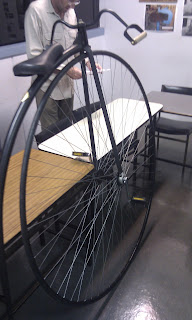 The first machine we learnt about was a unique machine Brett had made creating the profile for the solid rubber tyre to sit in. Essentially you get a looong length of mild steel and running it through 4 times and you have a nice profile. 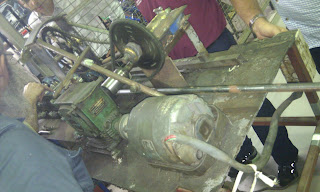 Then we learnt how to put the end on the spokes including a cute touch of stamping the first letter of our name in it. I'll talk more on this next week and put a picture up next week.
Posted by Aaron at 19:21 3 comments: